Leopard moments from our photo safaris 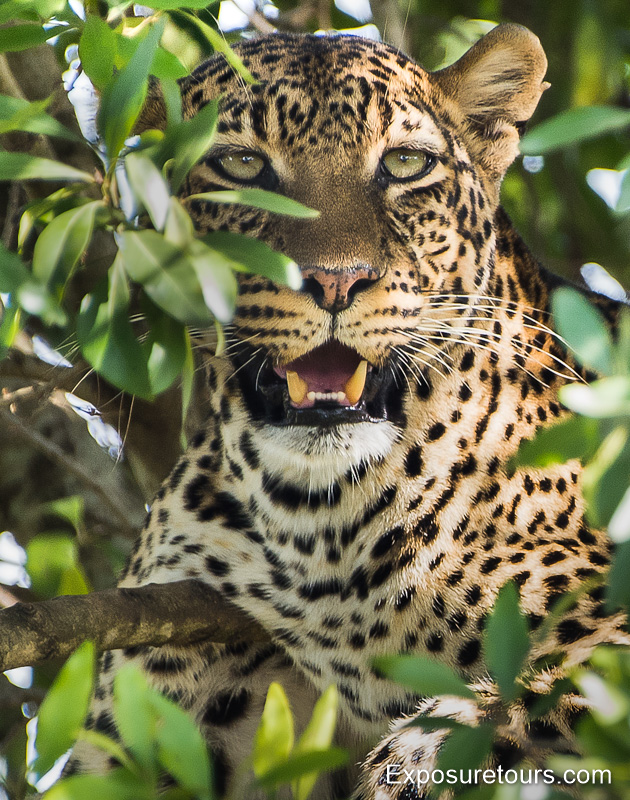 When it comes to the Big Five, Leopards (Panthera pardus) are among the most difficult to photograph. My first digital capture was back in 2007 when I came across a unique encounter with two lions at the base of a tree eagerly watching a leopard way up in the foliage. You can see this encounter here

Over the years Ive gone from seeing one per safari to now seeing three to four, over a 2 week period my record is five.

During the day with some hunting you can be lucky and find them resting in the bush or up in a tree. 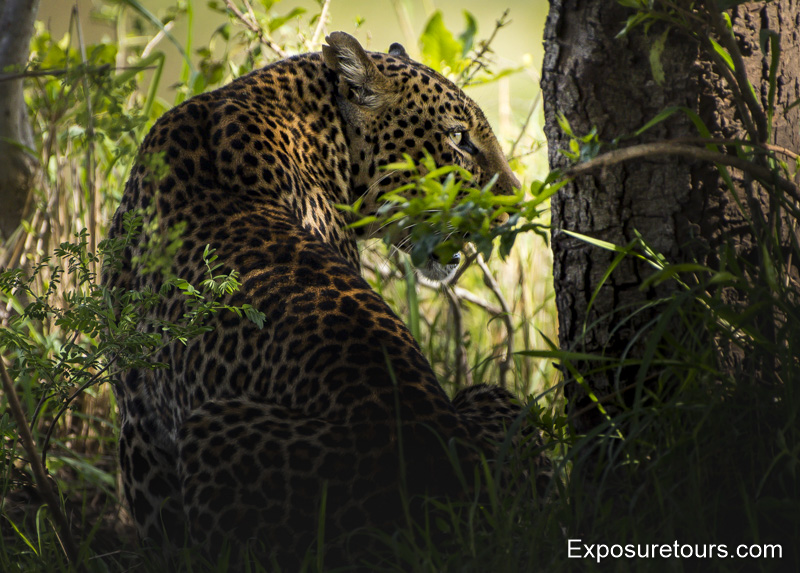 The classic leopard pose is ofcourse of them laying flat on a branch. From this high viewpoint they can observe both prey on the ground and in the distance. As a photographer this is also the easiest way to spot them, typically you will see their long tail hanging down and looking ‘out of place’ among the branches 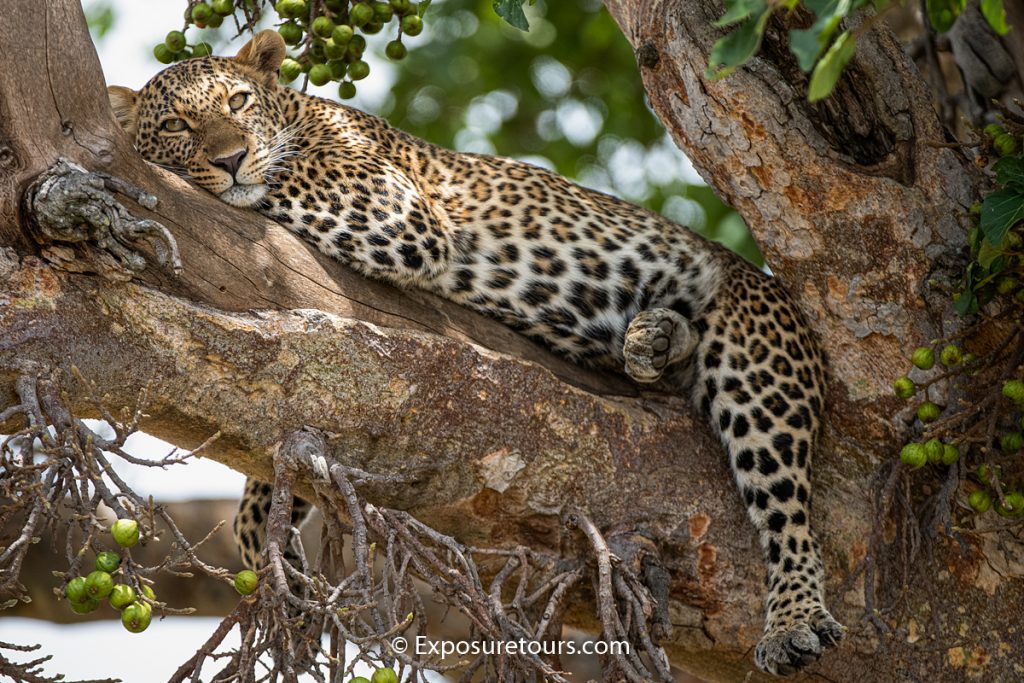 On a few rare occasions the conditions have been ideal and I’ve come across them walking in the open or looking for small prey on the ground. This one was my first open encounter from 2007 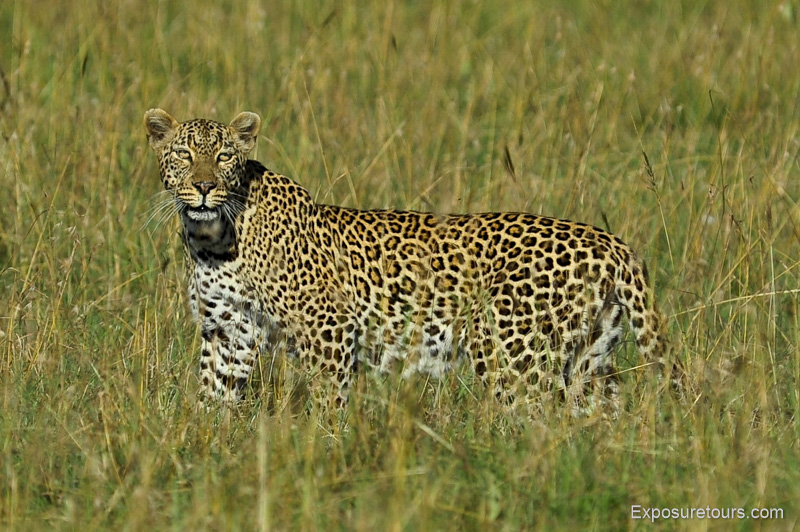 Leopards tend to be most active from dusk to dawn so getting a kill shot is almost impossible. 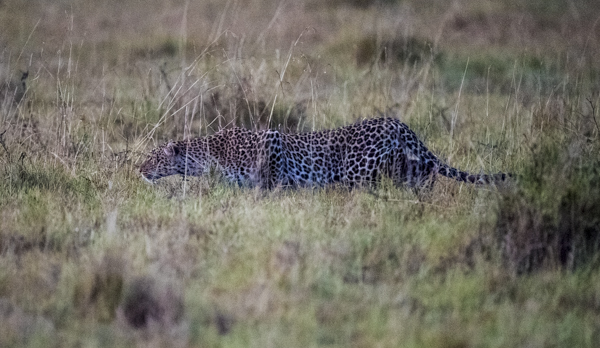 This image has been taken in almost total darkness. I had to switch the camera to manual focus and bump the iso to 20,000! Without the sensitive chip of digital camera it would be impossible to see the leopard with the naked eye. Watching it move slowly in the grass as it tracked a group of wildebeests was an amazing unique safari experience.

Their style of hunting is different from most cats. Lions typically hunt in groups by stalking their prey, slowly surrounding them and working together to isolate a weaker member of the herd, pouncing as the animal tries to escape. Cheetahs use speed as their primary weapon. 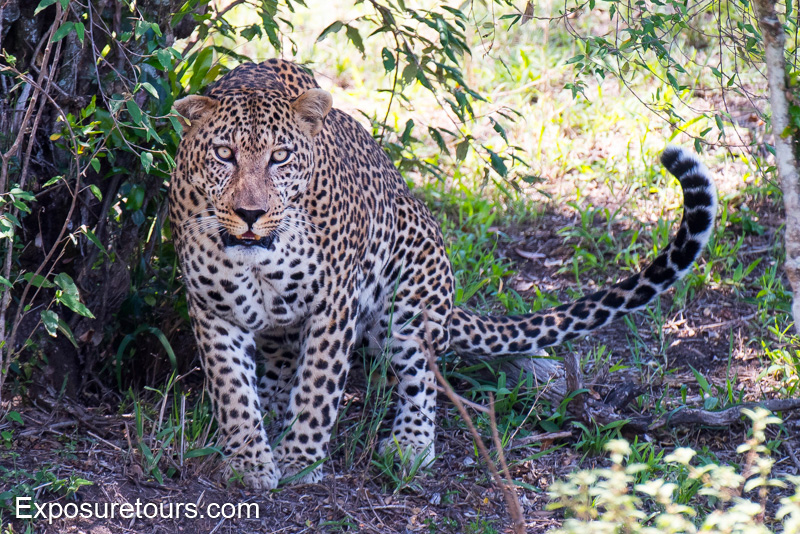 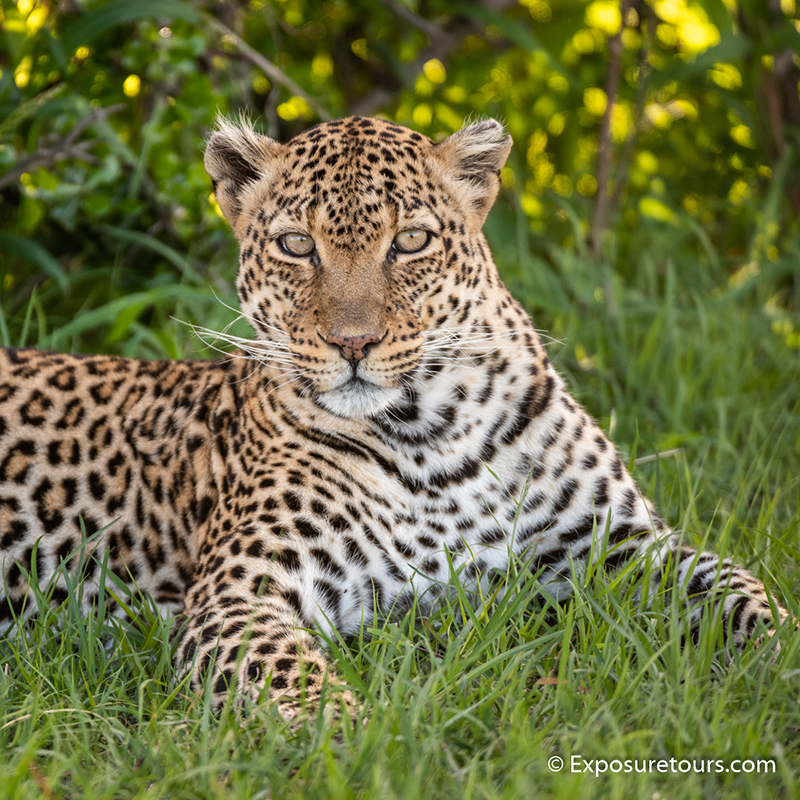 Leopards rely on stealth to get close to prey (mostly antelopes, deer and rodent) They move with their whole body less than an inch from the ground maintaining a low profile. When they are within 16 ft. They pounce and use their powerful jaws to bring down the kill. They are capable of taking down animals as heavy as 150kg compared to their own average weight of 10-40kg. 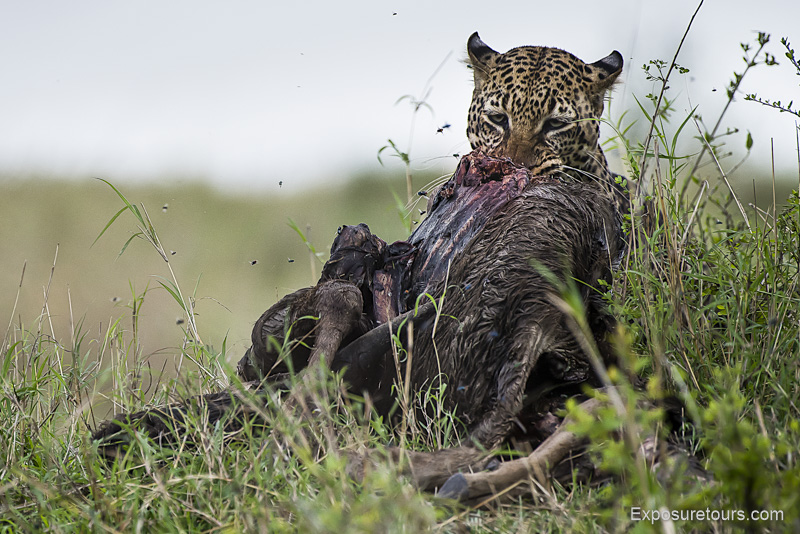 Small kills get eaten right away, large animals get dragged to a safer location and hauled up as high as 19ft into a tree. The leopard will feast on the kill over several days or even a week. Surprisingly the kill doesn’t smell as much as you would expect. Having the carcass hanging means that the blood can drain and the meat spoils at a slower rate. 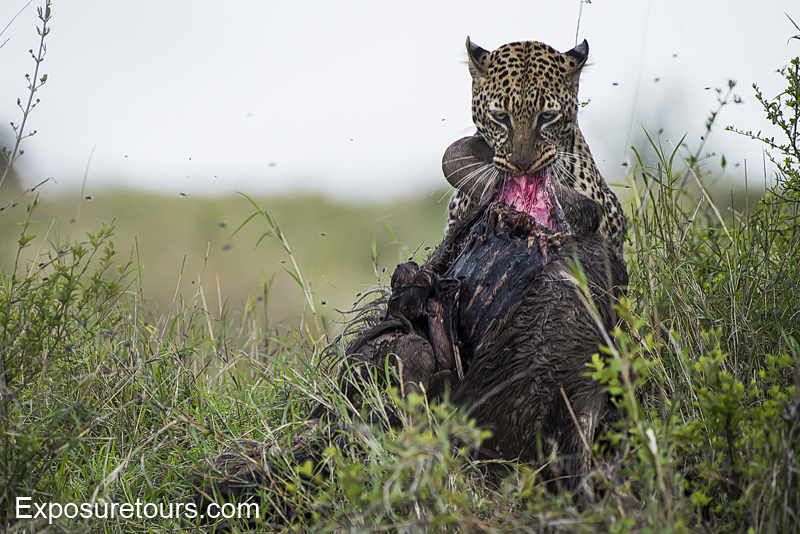 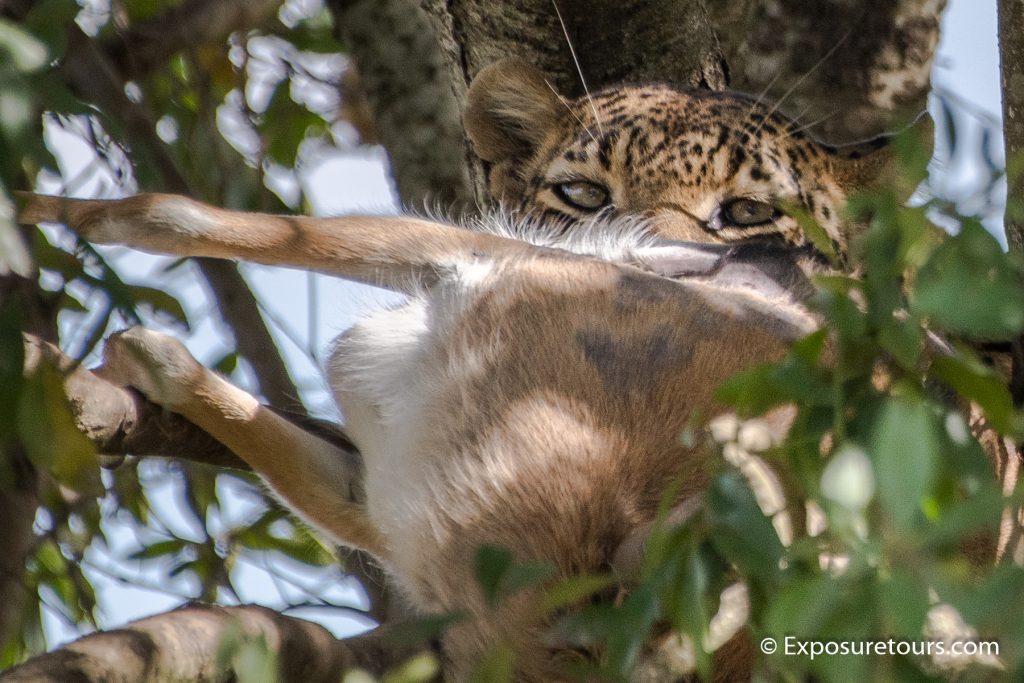 Most of the time I come across leopards by chance, however on my last trip I visited an area that is prime leopard territory. An initial search lasting around 90 minutes provided no sightings however on making our way back to camp I was able to get some shots of a playful leopard sitting and rolling in some grass (see below)
There really is no standard time for how long you have to wait for a good image. The next day I went back to the same area and immediately captured the close up shot of a female in a tree that you can see at the base of this post. I spent around an hour watching her so I could get a clear image and avoid as much foliage as possible.

Seeing a leopard with a cub is another rare experience. Their litter is normally 2-4 cubs with only 50% surviving past the first year. The mother leopard will often hide the cubs in thick bush away from predators and humans making a mother and cub shot an image I’m still working on capturing! 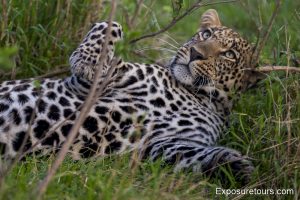 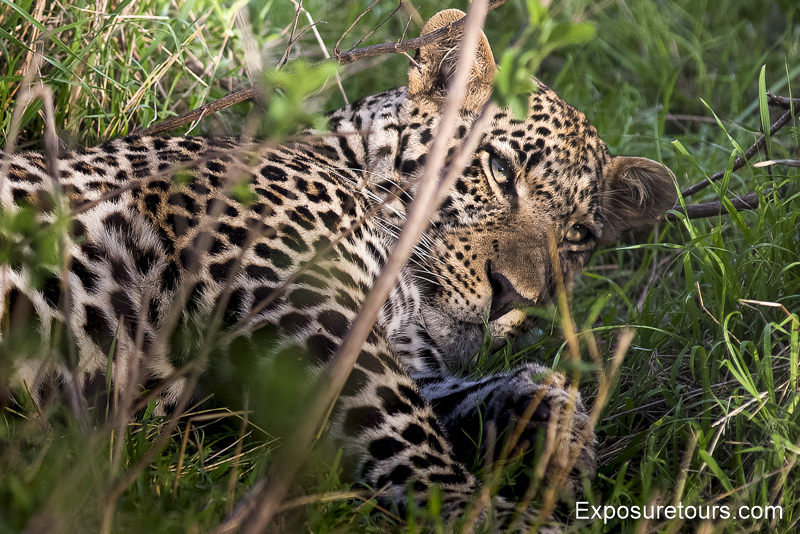 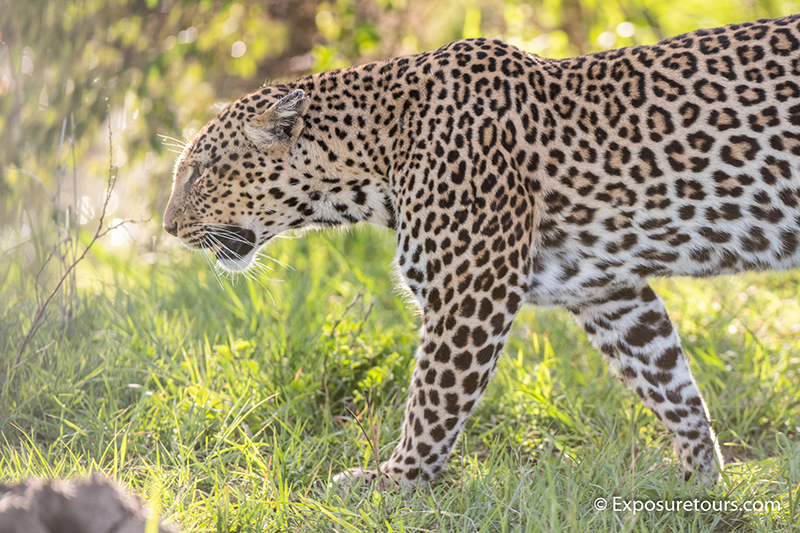 You will notice ive used a  variety of focal lengths. The leopards i come across tend not to be shy so i use a range from 150mm to 500mm full frame on average 400mm is my most commonly used focal length 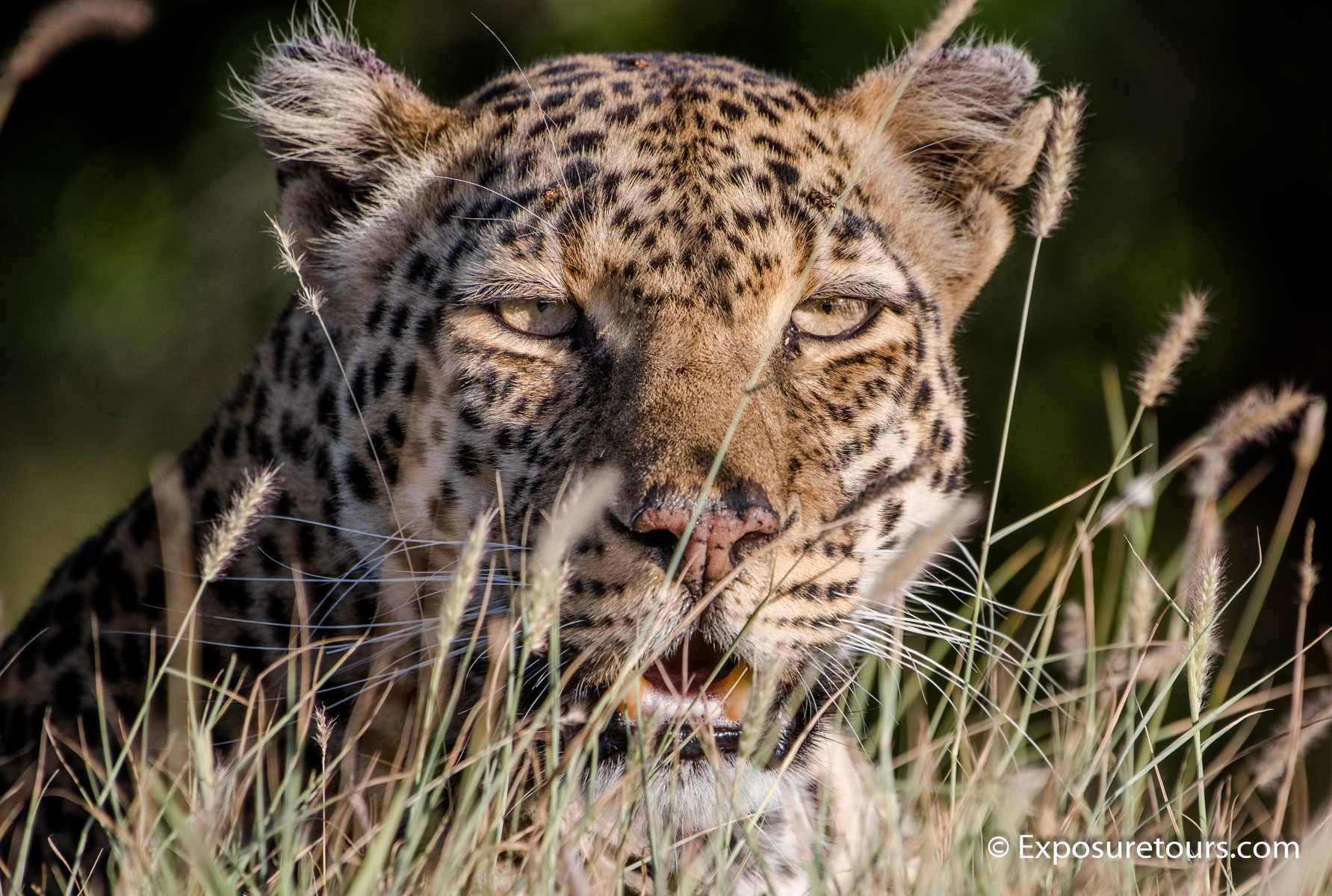 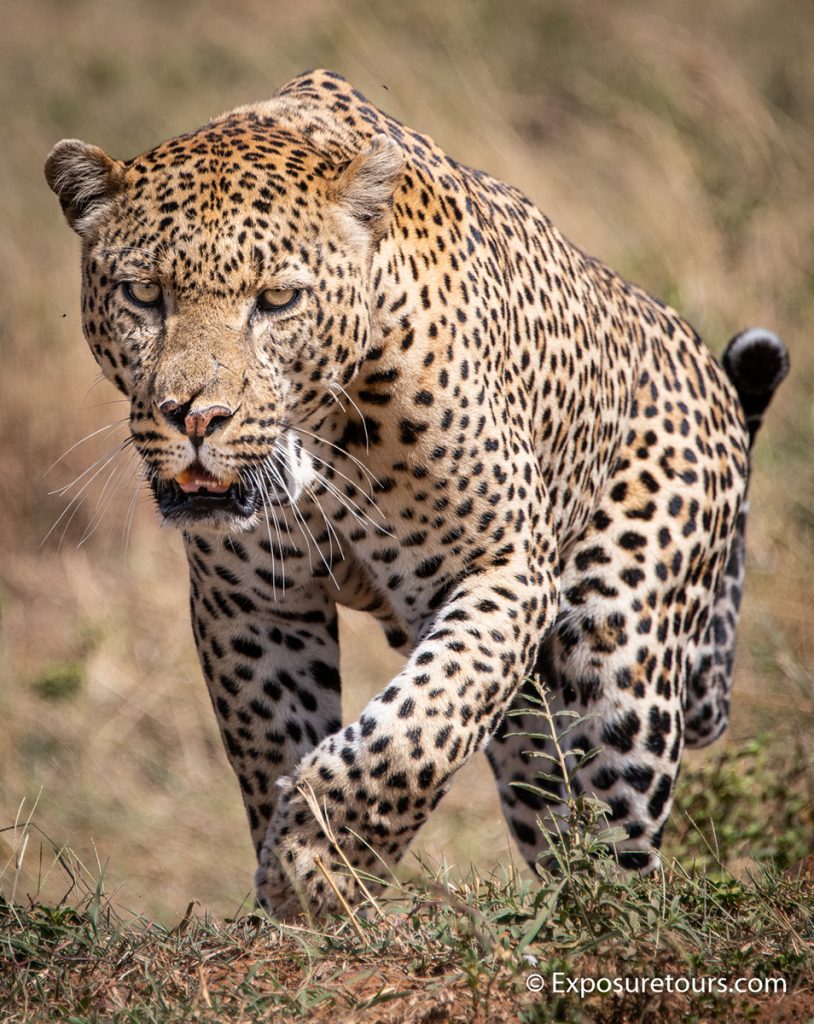 For many years I have photographed the leopard at the top of this page. This year I was privileged to be asked by the rangers to officially name her. I called her Sarah.
I hope she will have a long and fruitful life.

Want to get your own Leopard Pictures? 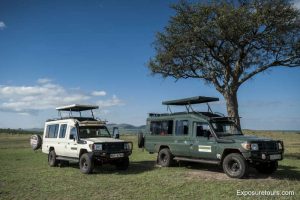 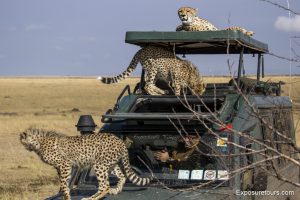